Optimizing the delivery of Javascripts on Joomla
EasySocial 1.3

As most of you have already knew, EasyBlog 5 has become a part of the our daily routine. Balancing between development and support is very taxing for most of us after we introduced EasySocial last year.

Our primary goal during the development phase of EasyBlog 5 is to push it out as fast as we could so that we could focus on our other offerings. In fact, our initial planned release date for EasyBlog 5 is on November 2014. However, after tons of trial and errors,  we wouldn't want to release a half baked product simply because we were running out of time.

This time around, rather than spending our precious time creating videos or teasers (It's time consuming to record videos and voice over), I would just like to quickly wrap up some of the major changes which we have already added into EasyBlog 5 below:

We have literally redesigned every user interface ground up, right from the setup screen up till the composer. This is to ensure that EasyBlog is up to date with the latest and coolest UI elements available today. The administration area has been overhauled and it allows you, as the site administrator, to quickly access all of the features within EasyBlog. Last but not least, responsive layouts on the back end allows you to manage the blog with your mobile devices. These are some of the screen shots of the installation screen and the administration area. 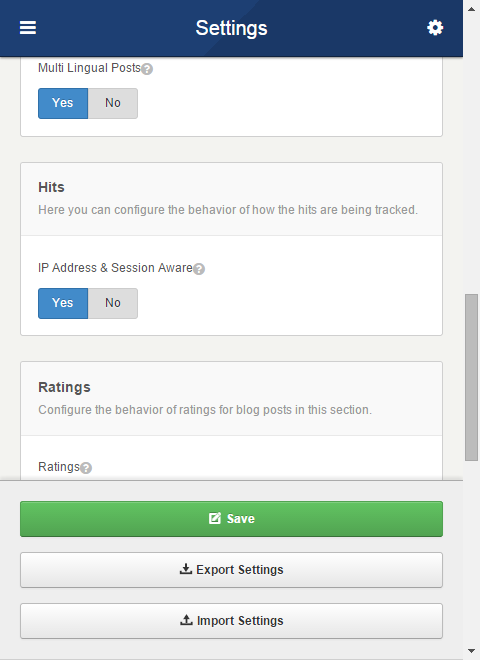 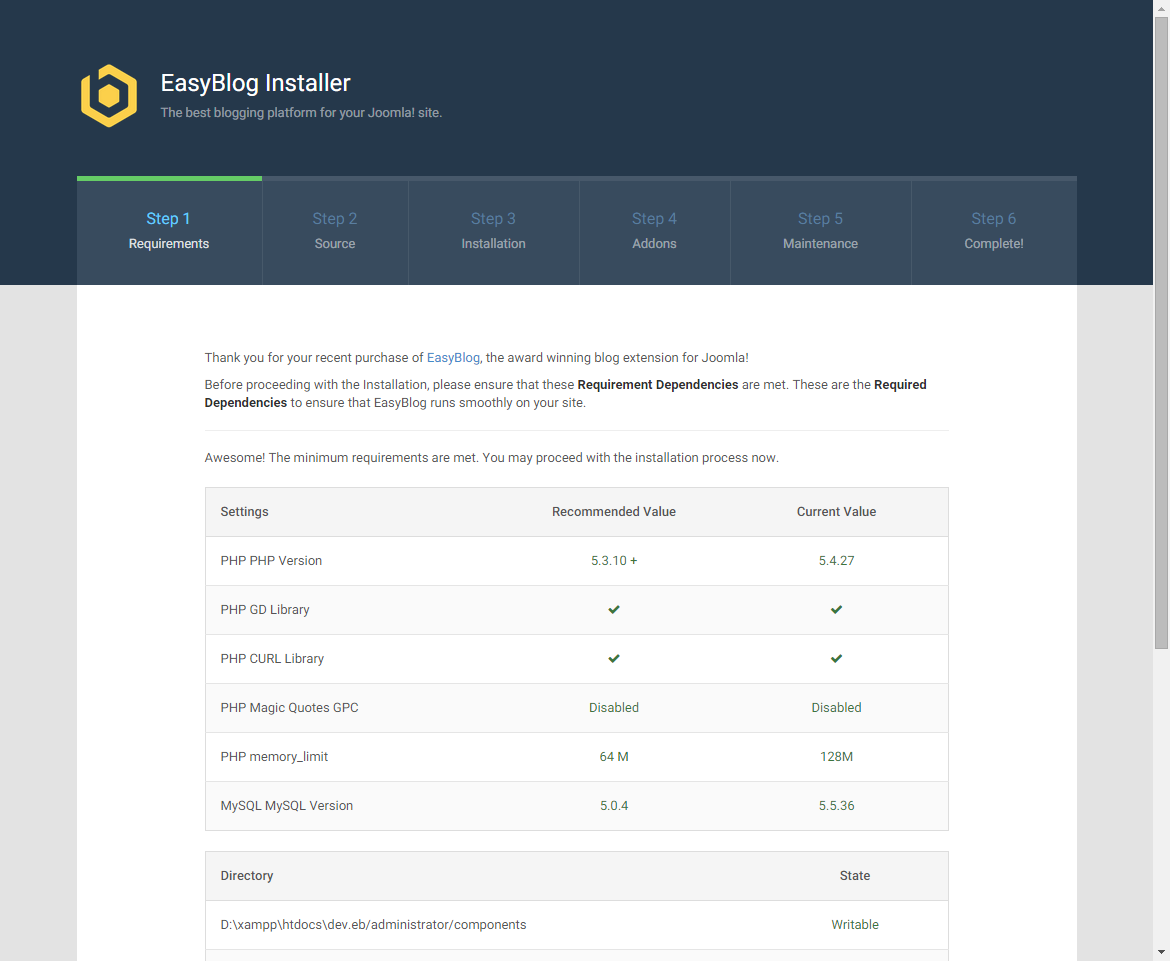 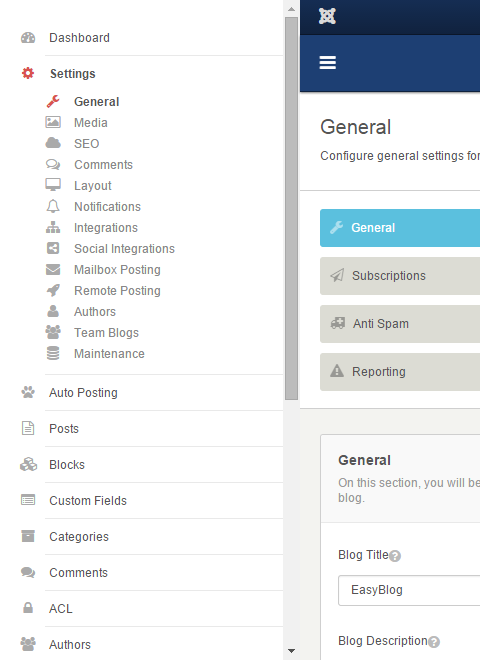 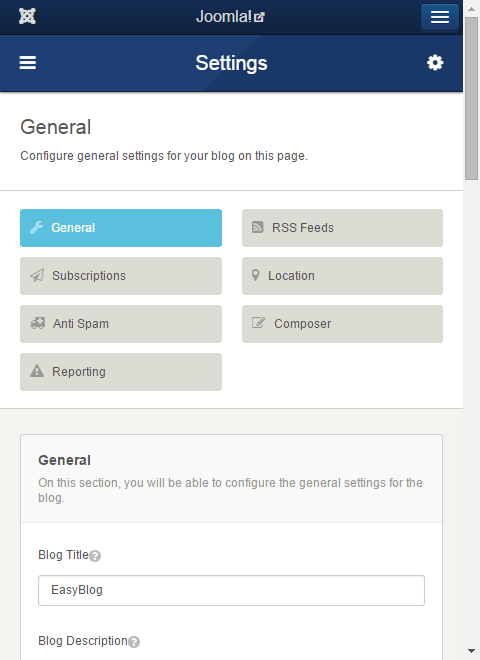 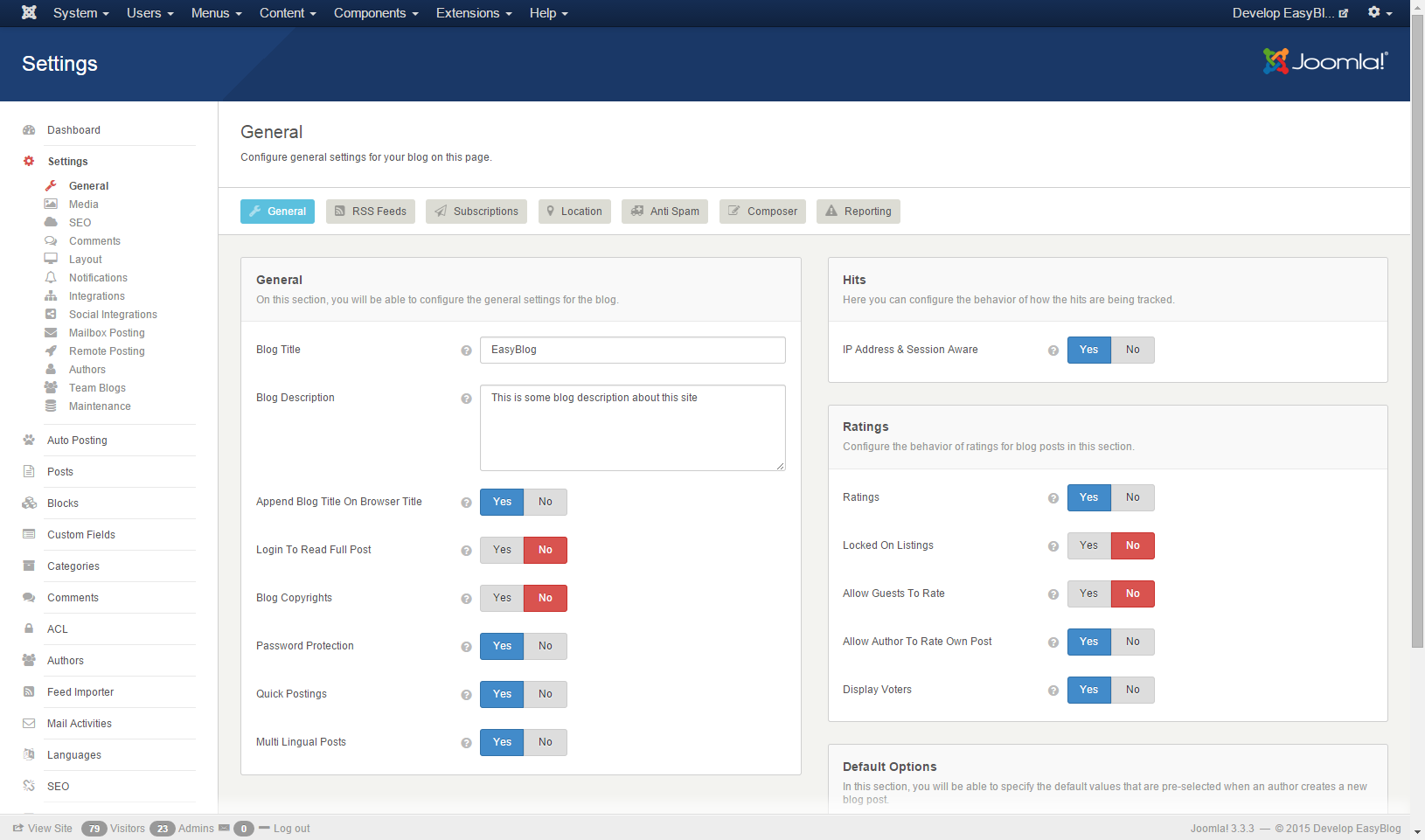 These are just some of the screen shots that I could quickly grab. On the front end, everything is refreshed and we have close to about 30 different themes now! It also has columns layout as well (Which will be raved about in the upcoming post by my colleague Justin!)

We have improved the performance of serving the blogs by building an internal caching mechanism which caches some of the most common sql queries. Apart from the query caches, we have also optimized our scripts and reduced closed to 20,000 lines of redundant / slimy / crappy codes! Expect that your EasyBlog powered site to have a speed improvement of up to 300%!

I wish there's a screen shot for this, I can't wait till you guys install it on your site!

The Composer, of course!

We were ambitious, in fact, too ambitious to begin with. Our initial idea was to build a simple composer which allows authors from the site to quickly draft the posts by dragging and dropping blocks into the composer area utilizing Redactor. It's tricky and tedious as we needed to customize Redactor to accommodate drag-n-drop behavior in the editor itself. Ask any programmer / software developer about this and they'll share the same pain that we went through. Despite all the hurdles, we continued to search for solutions and we finally managed to get it done right after rewriting the composer from scratch 5 times! 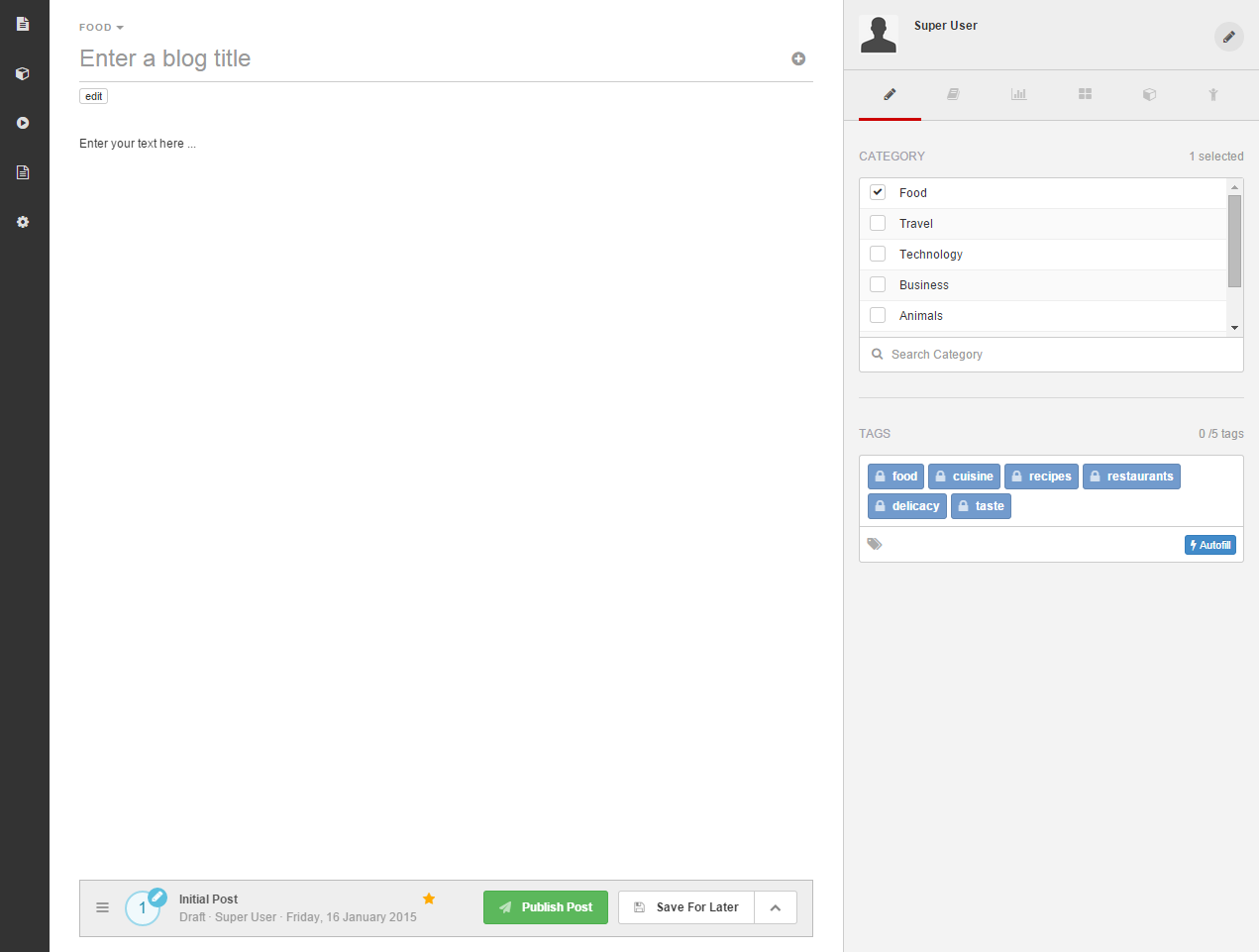 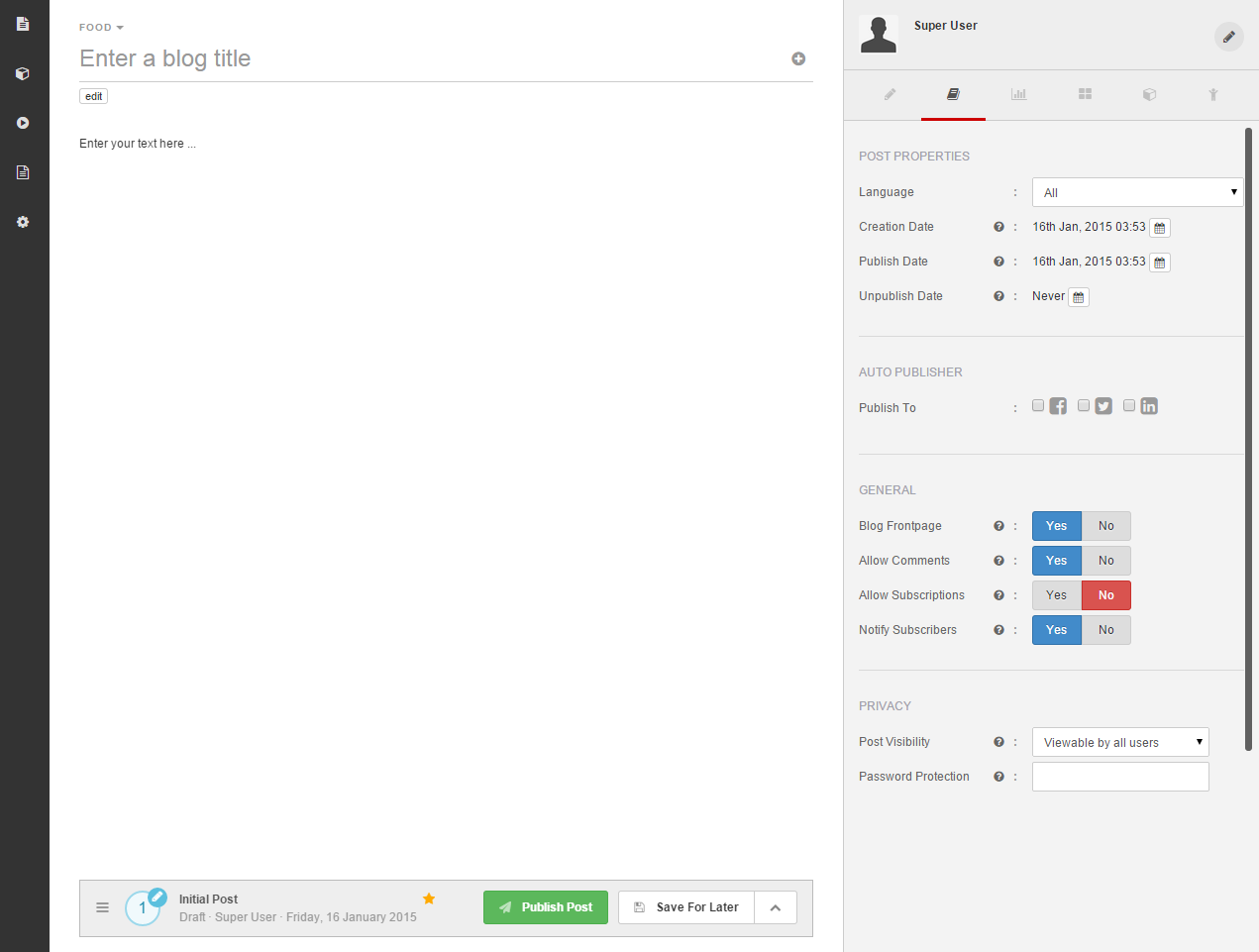 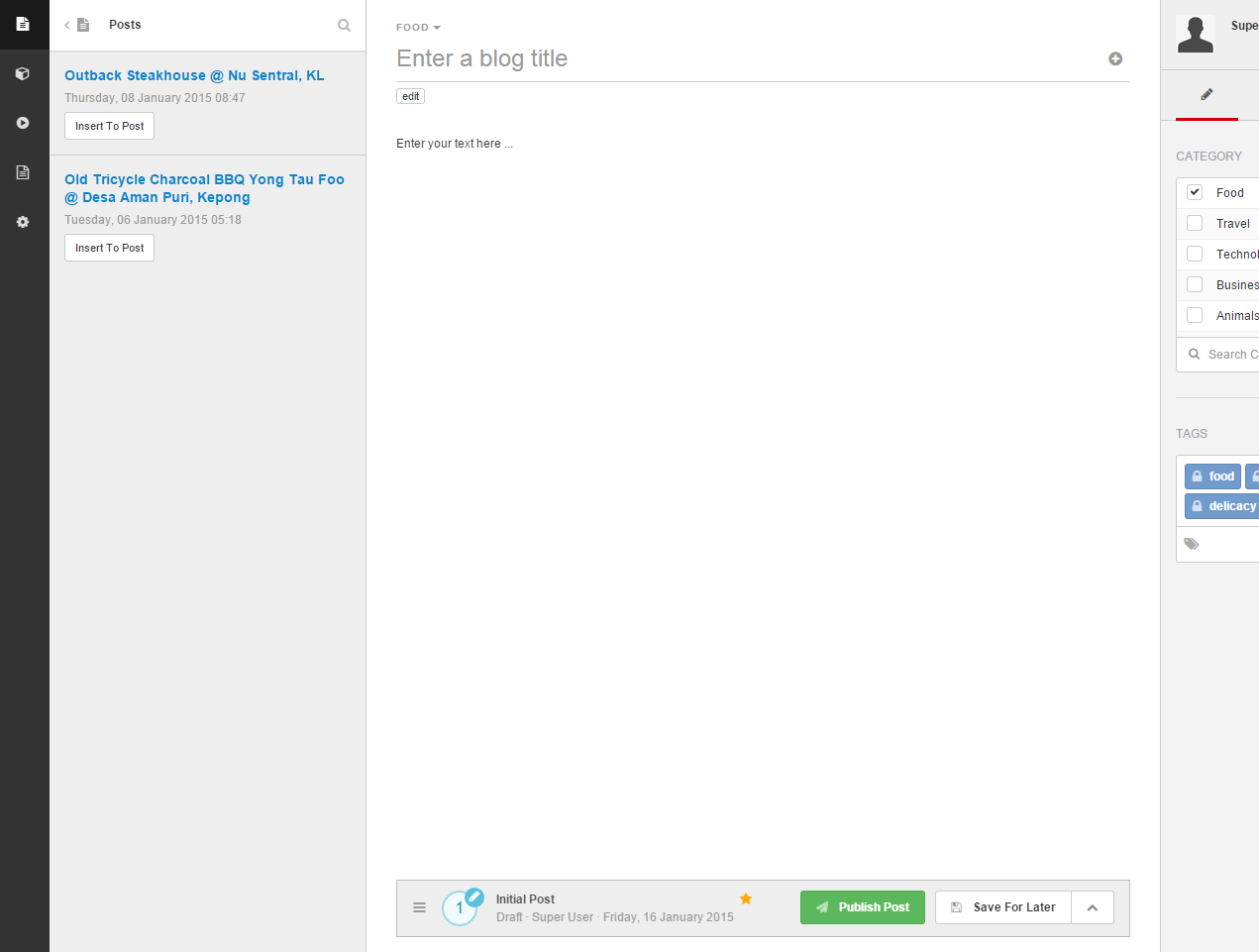 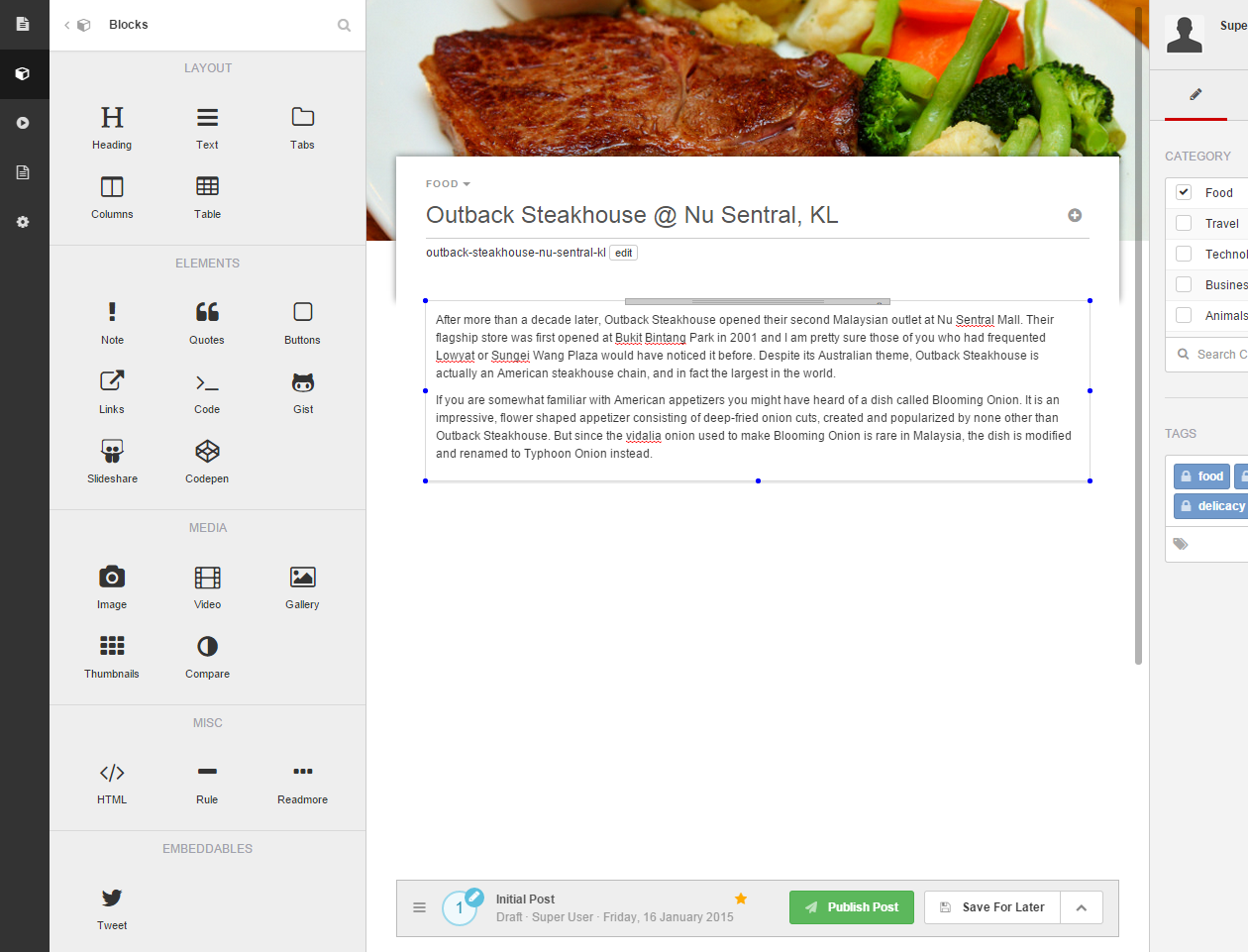 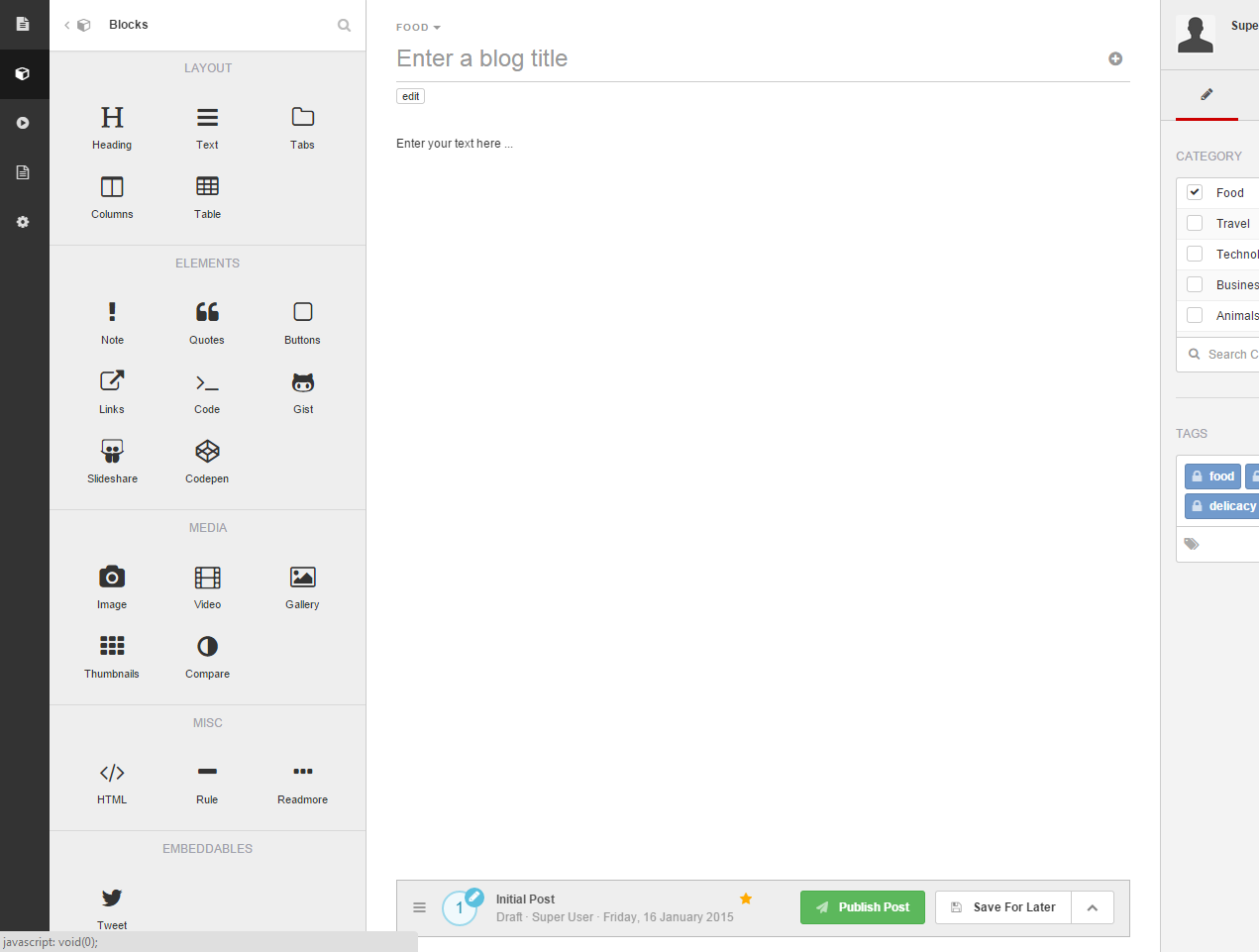 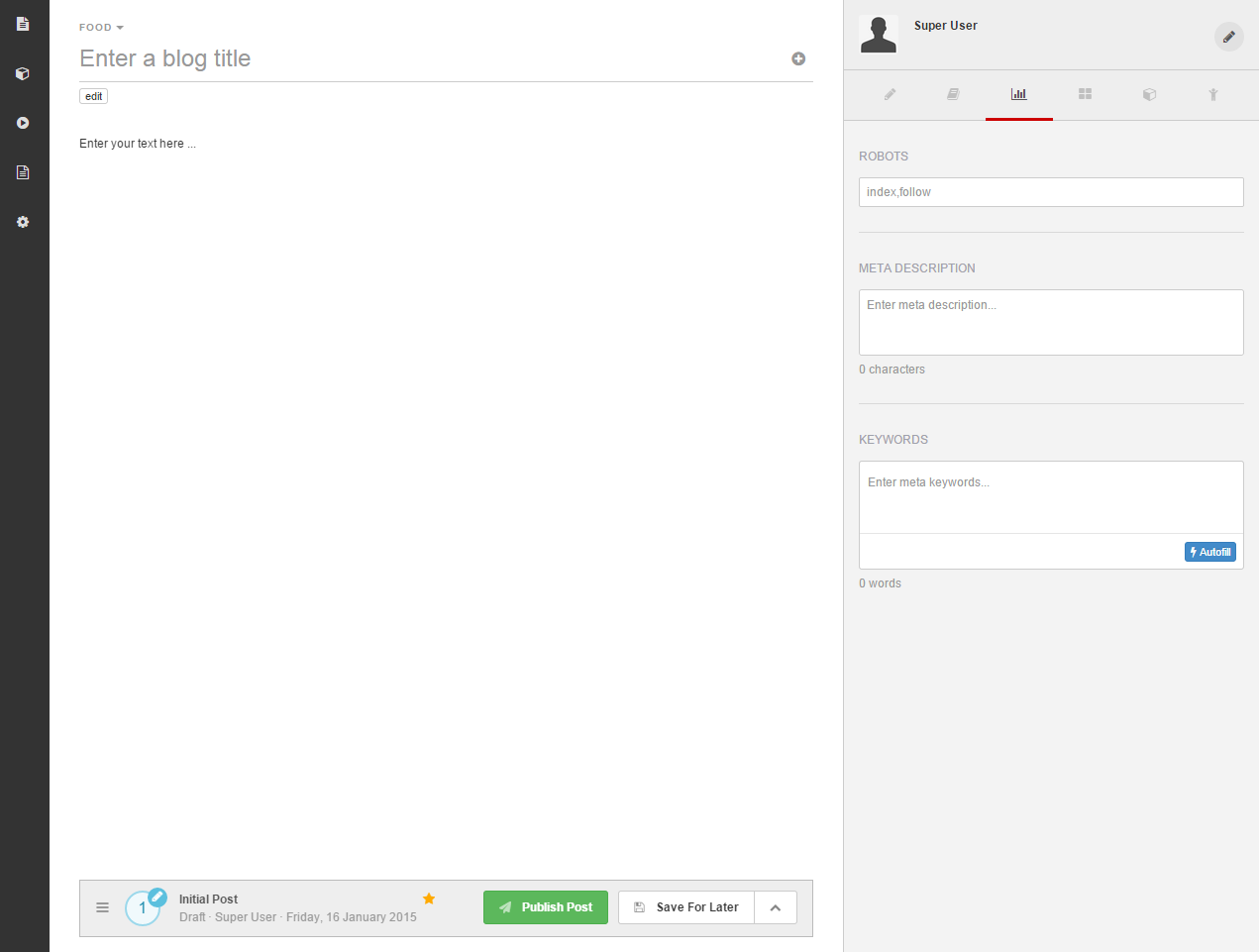 This time around, I will only be sharing some minor screen shots because the composer itself should be a separate post altogether. By the way, because of the heavy concentration and care needed towards the composer, we have decided to stop updating the EasyBlog 5 development page as we are unable to allocate enough time to complete the video series (We sincerely apologize about that!).

We have been collaborating with the guys at Techjoomla and we have also included a JSON API which allows them to easily access posts and allows you to compose your blog post using their mobile app. The JSON API isn't just restricted to them but anyone could actually write a third party application to connect to the API.

Remember when we first released EasyBlog 3 and everyone was raving about the awesome looking media manager? Well, it's ancient now and we thought that since we are working on the composer, we would like to try to improvise on the media manager. The thought process isn't as simple as allowing authors to pick their media files but rather understanding what authors really need when it comes to media management.

We have restructured the media manager to allow authors to easily access and manage their media items! Each post would now contain it's own folder allowing you to easily filter media items that you used in respective posts accordingly. 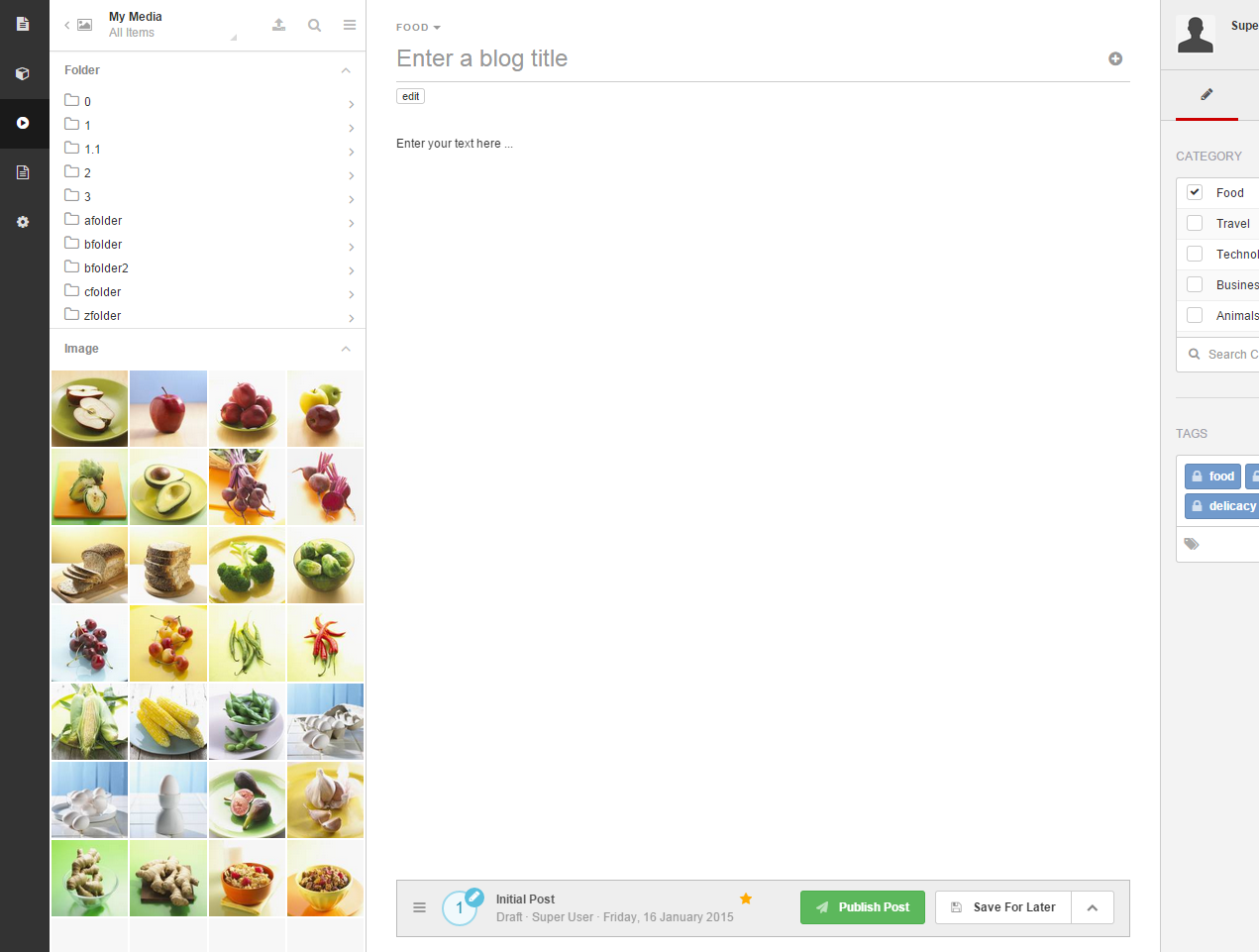 While you were reading the post, I am pretty sure that you have this question running on your mind and want an answer! We can't provide an exact timeline or timeframe at this point of time just in case there are some slight road blocks that may or may not appear but as I have been working and testing on it thoroughly, I would say that an Alpha release should be available soon!

I personally would like to take this time to thank our awesome customers and supporters for being ever so understanding. I know this isn't easy for most of you but it isn't easy for us either as we need to also juggle between our support desk and our development too. I will personally work out on a benefit scheme with Justin, our Sales & Marketing Manager for our active customers.

I would also like to thank the awesome team at Stack Ideas for their dedication and efforts placed in EasyBlog 5! It's amazing to see what we have achieved!

P/S: These updates are only the tip of the iceberg. There's more to come and my colleague Justin, will be updating the blog as we progress. The team and I are really eager to show you more!

Hope you enjoyed this post, have fun while I get back to my coding cave now!